And finally here is the 6th and last part of my wee trip to the Westfjords (so many blogposts for such a short trip!!). This time I´m wearing a newly released hat pattern: Veiðistafur or fishing stave. The pattern from this hat was part of my first Icelandic yarn club in 2019 to which it was exclusive for a year. I have now published the pattern for everyone to purchase. All the links are at the end of this blogpost.

Of course I HAD to take the hat with me in the Westfjords, let me tell you why. 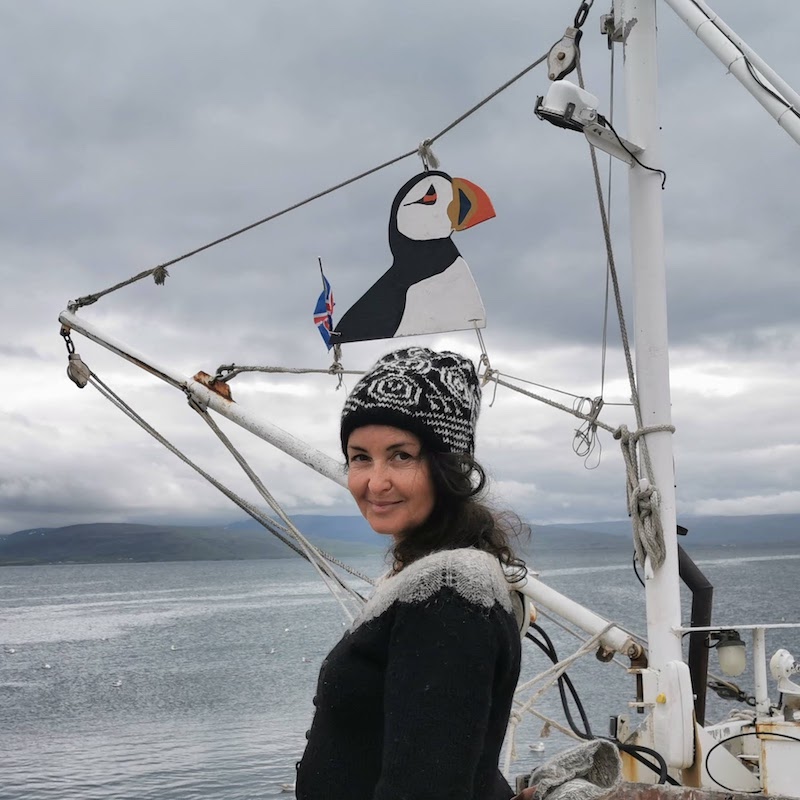 The culture of Iceland is full of mythology and magic. From the Sagas and Eddas of the vikings; to elves and trolls and stories of witchcraft, Iceland is indeed the land of magic. Here is a map of Iceland showing places where magic took place and where witches were burned. As you can see, there is a concentration in the Westfjords. 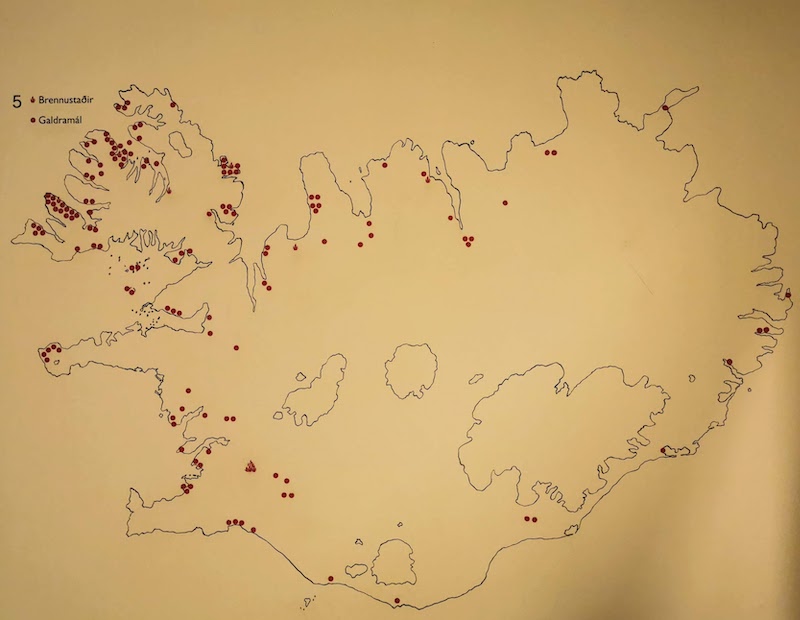 It is no surprise that the Icelandic Museum of Sorcery and Witchcraft, is situated there in the little fishing village of Hólmavík. 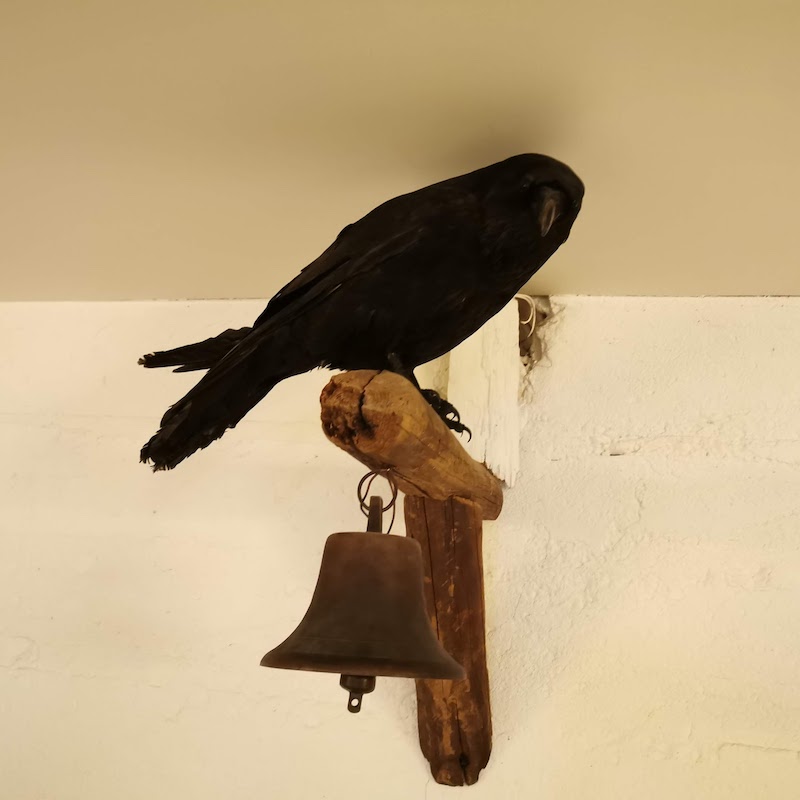 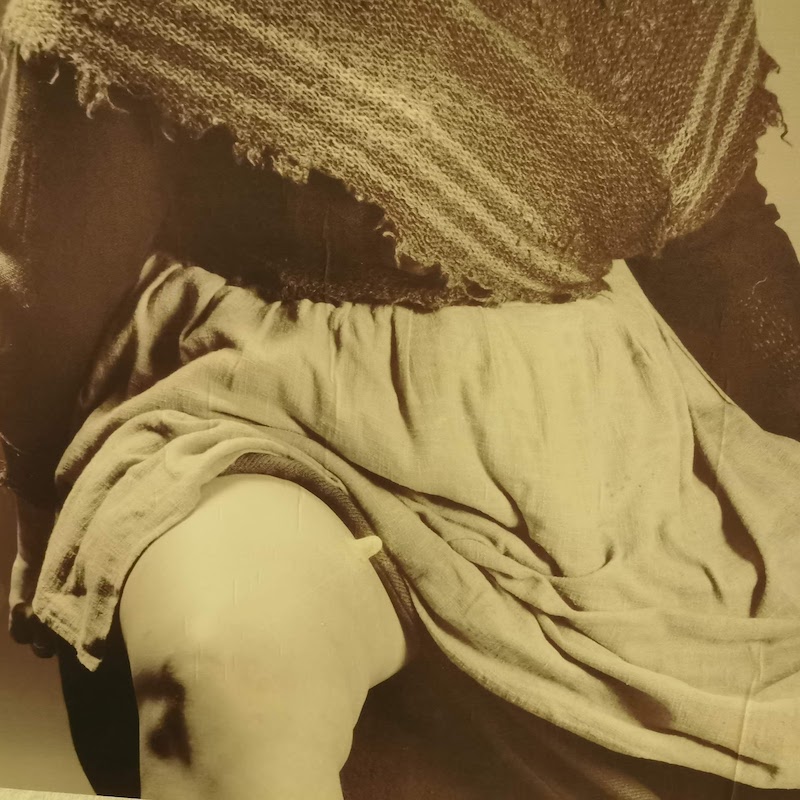 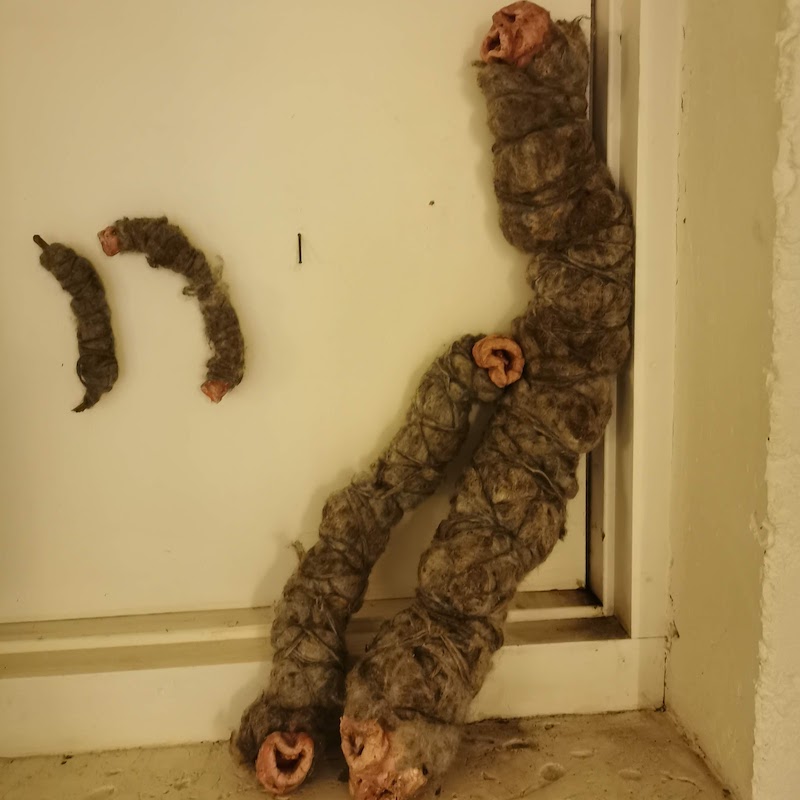 Between 1400 to 1800, Galdrastafir started to appear and most of them are preserved in grimoires dating from the 17th century and later. The Galdrastafir (plural of galdrastafur) are Icelandic magical staves: from galdra magic and stafir (plurial of stafur) sticks, but also letters (of the alphabet) or characters. They translate into staves (plural of staff) with is Old English for some kind of straight supportive structure. 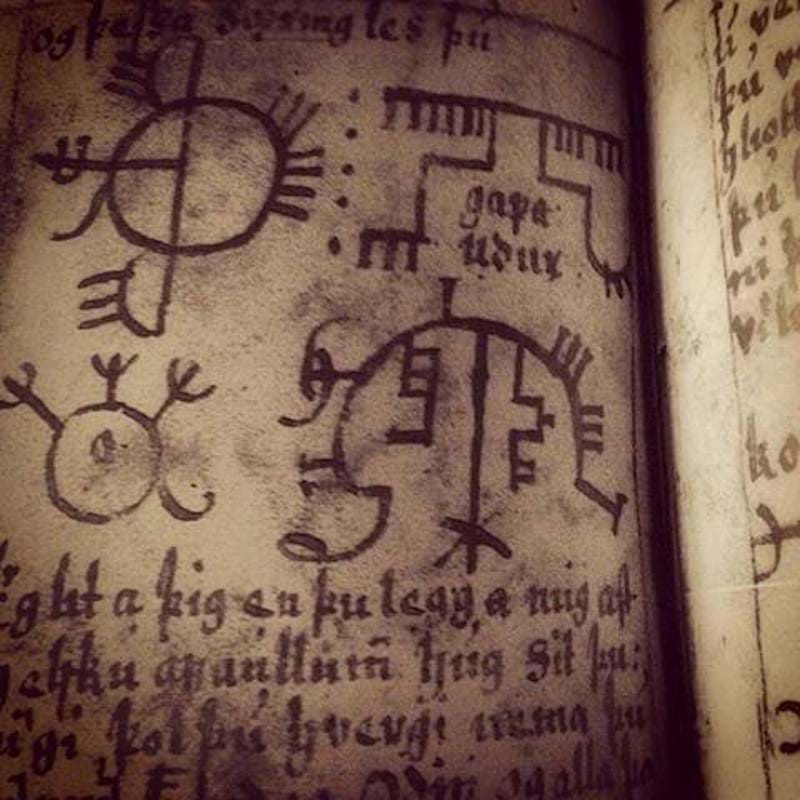 They were usually designed to control the elements or steer developments and borrowed elements from pagan times, from Norse mythology and folklore, and from runic characters. There are hundreds of them and many reflect issues current for their times. According to the Museum of Icelandic Sorcery and Witchcraft, “the effects credited to most of the staves were very relevant to the average Icelanders of the time, who were mostly subsistence farmers and had to deal with harsh climatic conditions.” There are for example staves to prevent barrels from leaking, to ward off foxes, to win in glima (Icelandic folk wrestling popular since Viking times) or to lead people in bad weather. 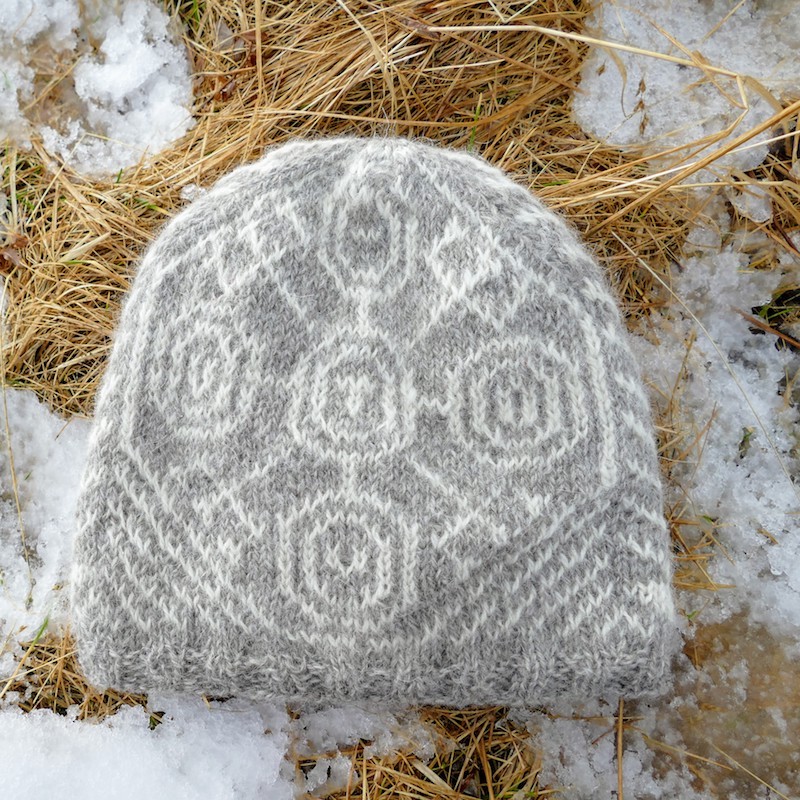 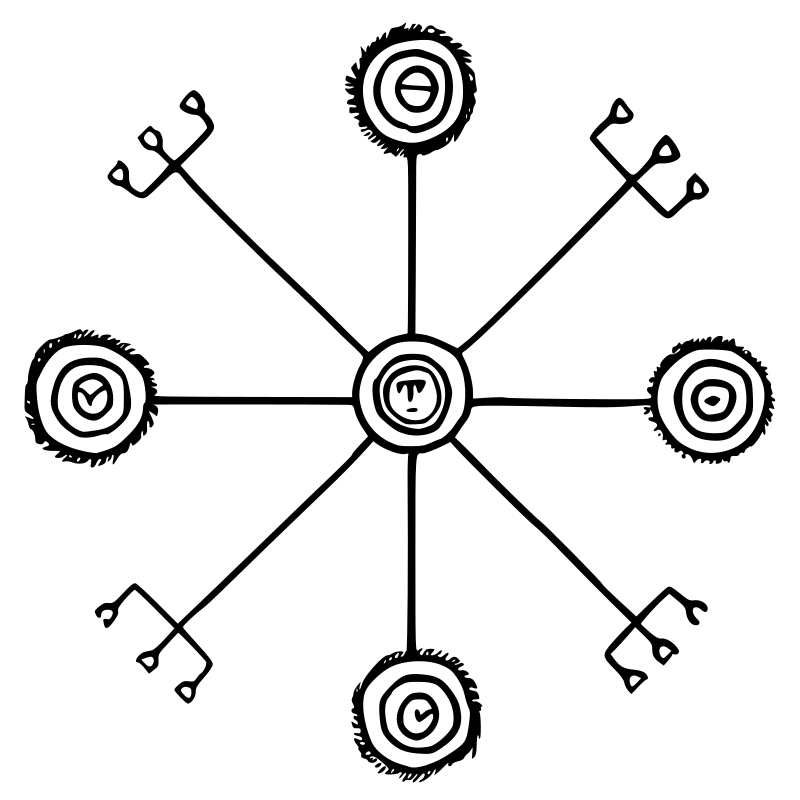 The stave decorating the hat is called Veiðistafur (veiða, to fish) and brings luck in fishing. Like most staves, it will be effective only if you follow certain instructions, many of them being rather bloody. 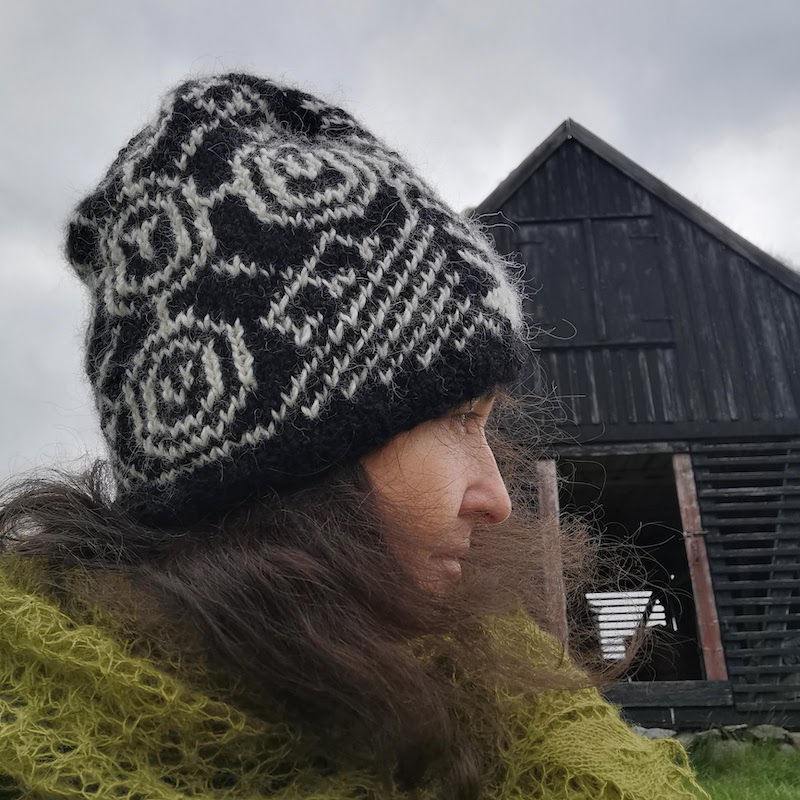 For the Veiðistafur to work “it should be drawn in wren’s blood on a caul with a pen made of a raven’s feather. Then put it in a gimlet hole under the prow of your ship and you will always have a good catch”. 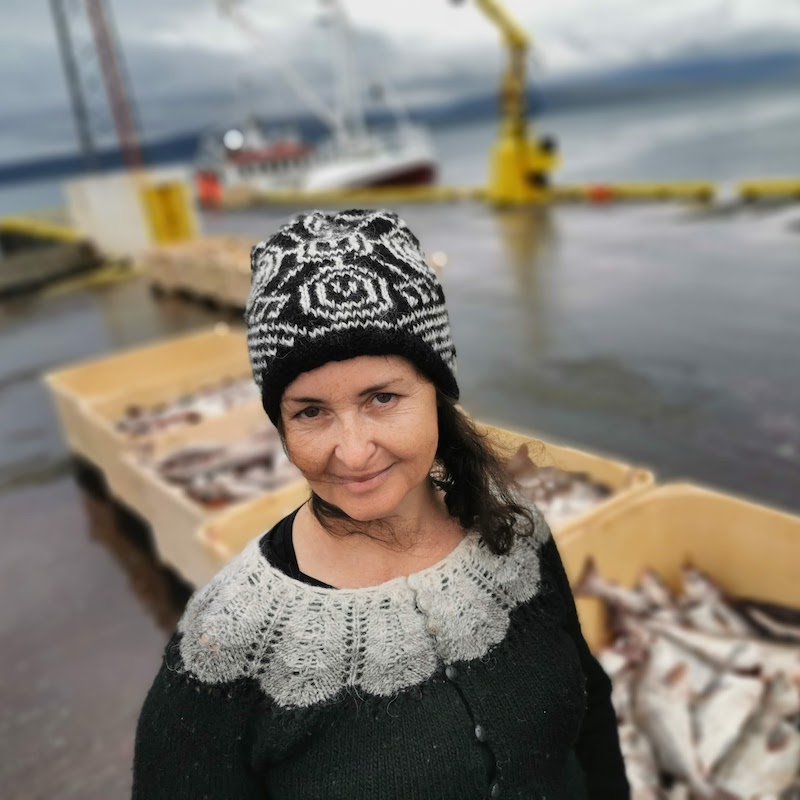 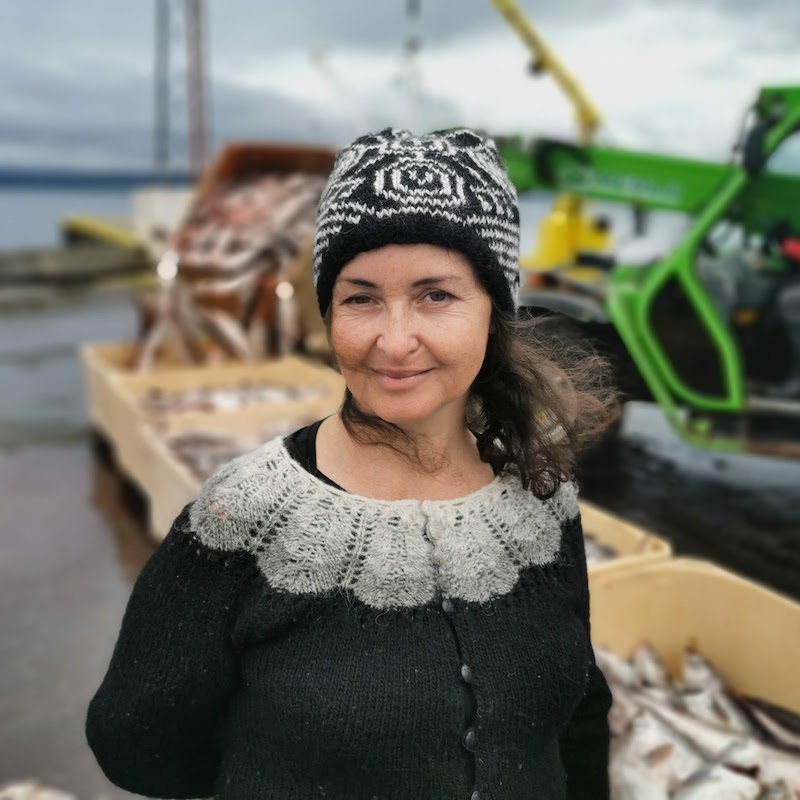 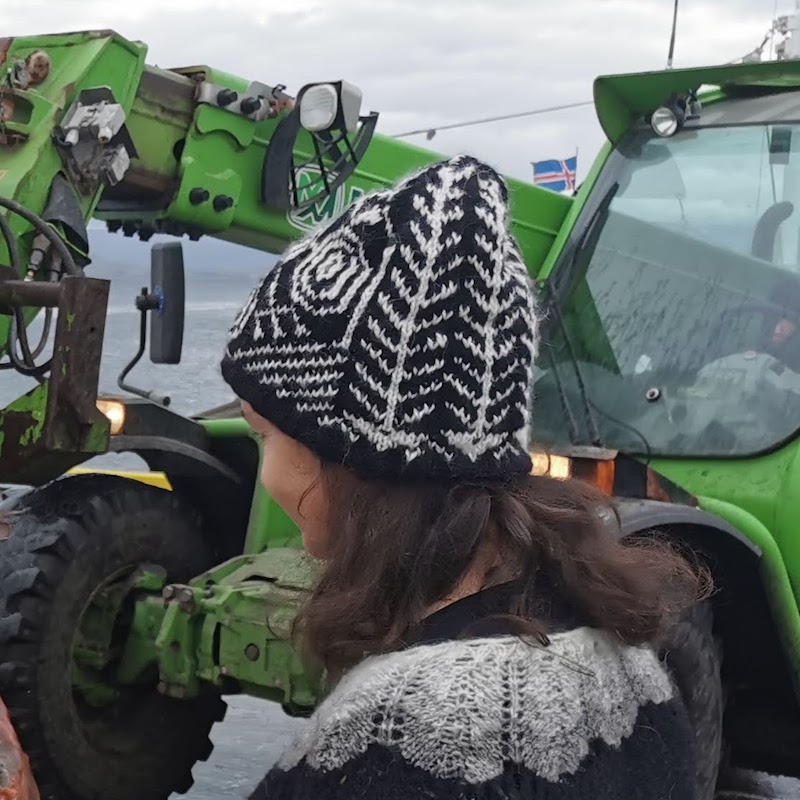 Rather than following those instructions, I tried my luck at knitting the stave on a hat, but the only thing I got were the fish bones decorating the hat on both sides of the knitted stave! 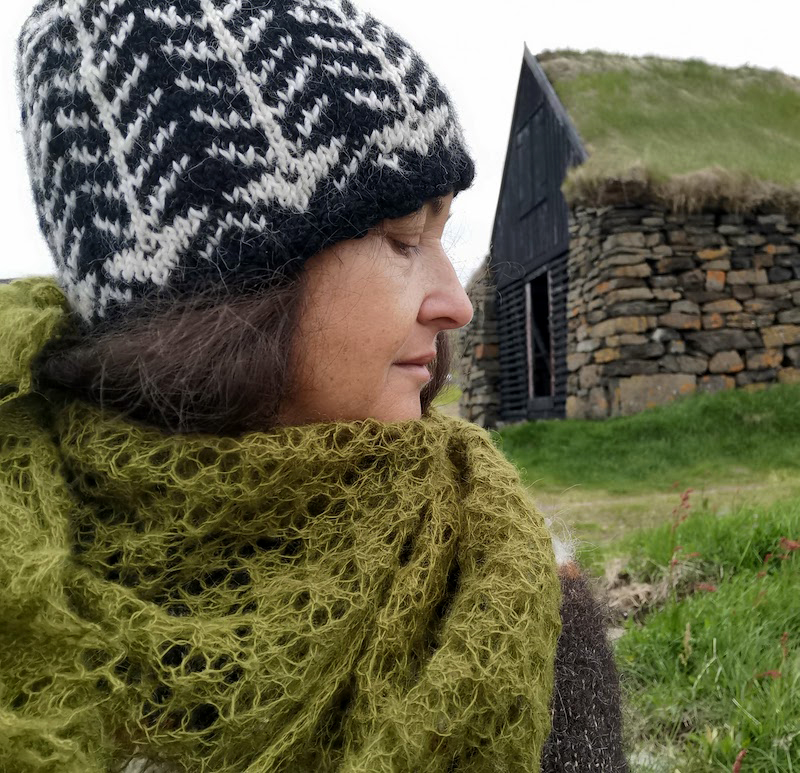 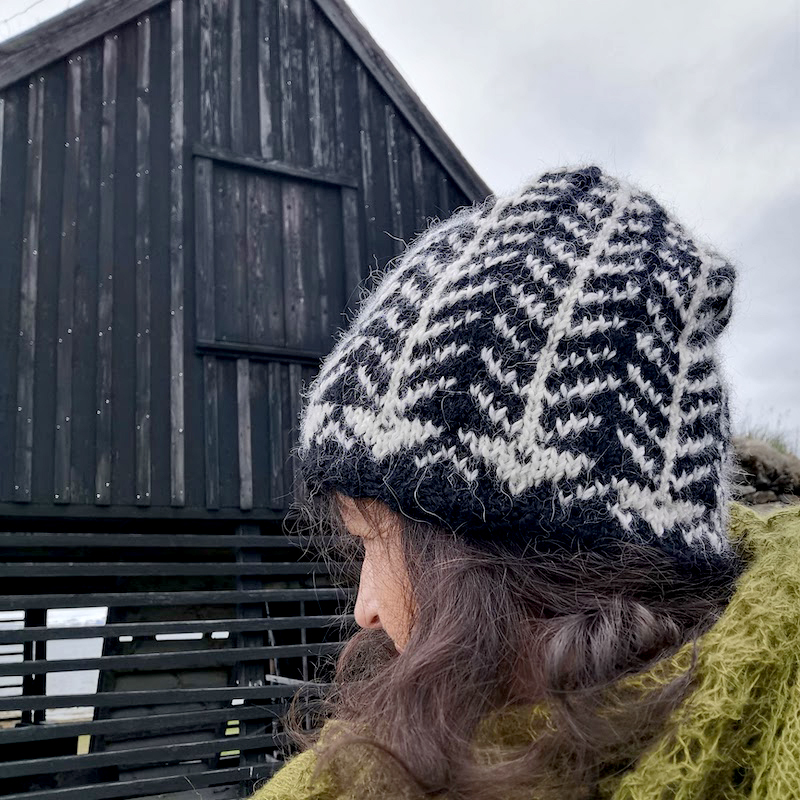 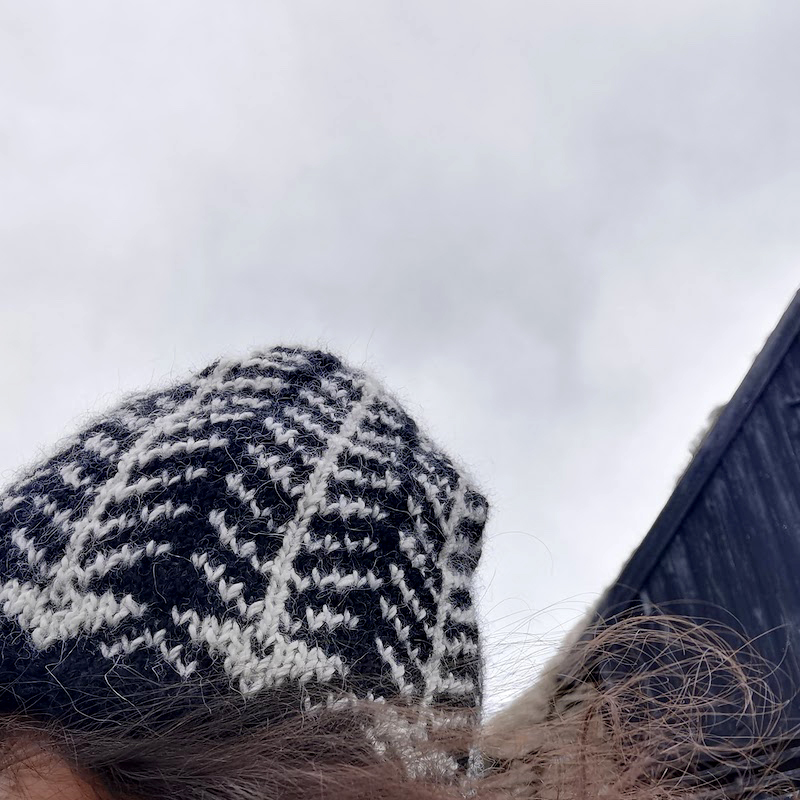 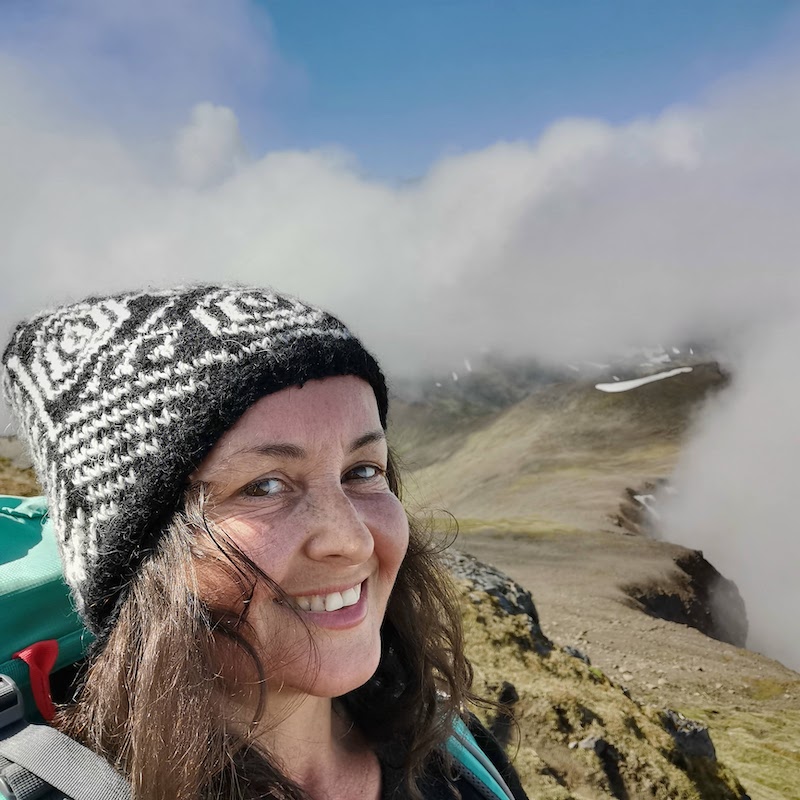 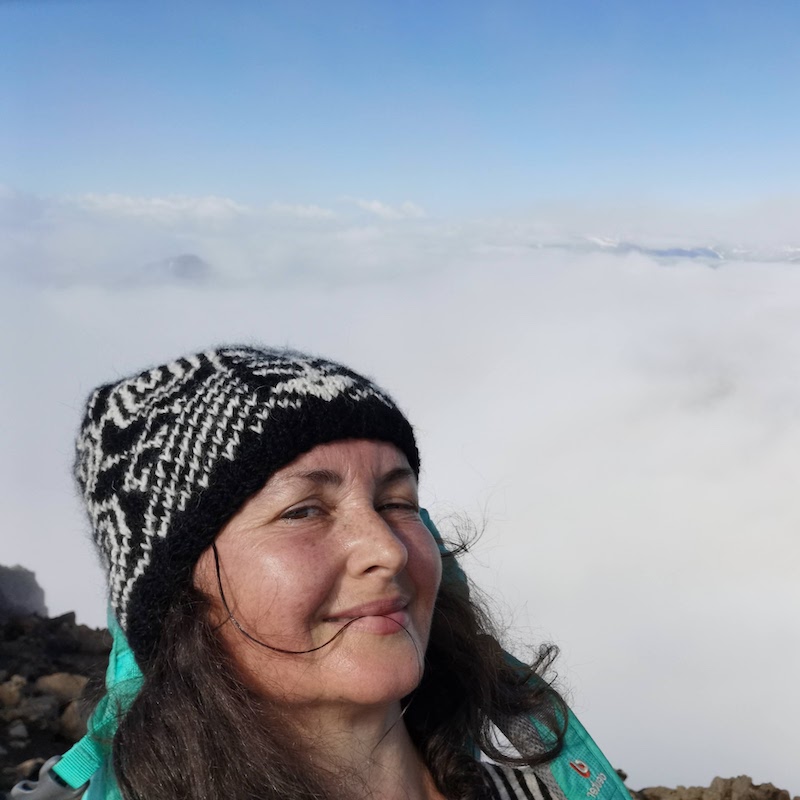 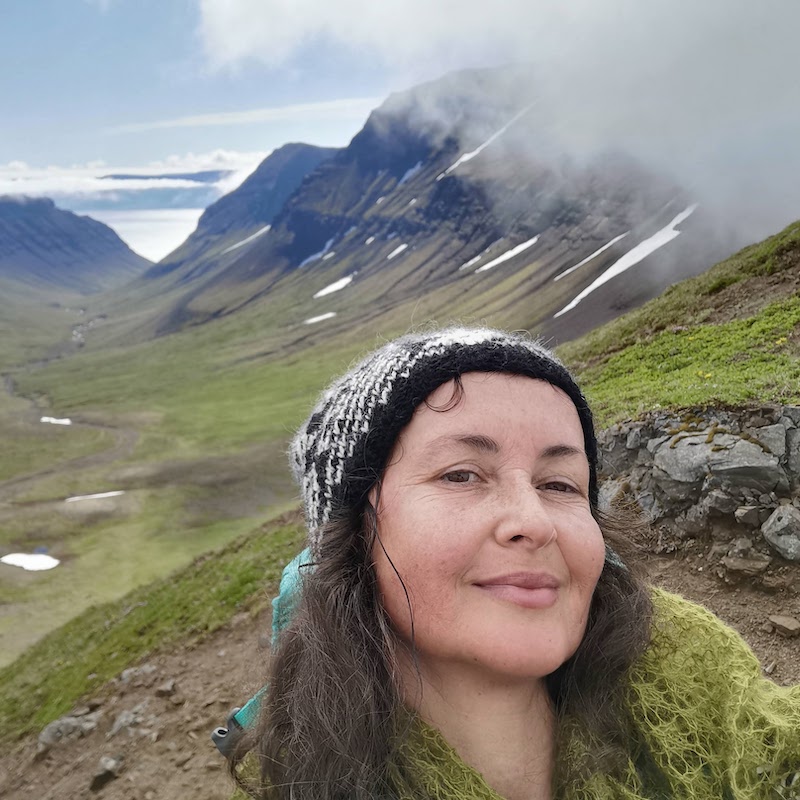 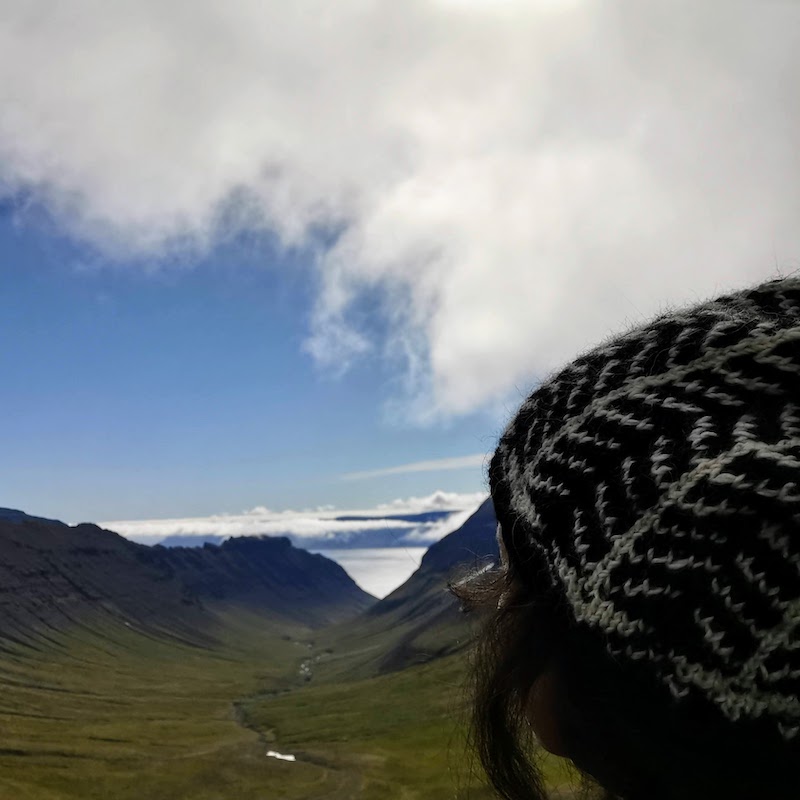 The hat comes in 3 sizes (S, M and L, shown in size M) and is meant to be slouchy. It is knitted from the bottom up in stranded knitting with a few decreases in the “fish bones” to shape a loose crown. 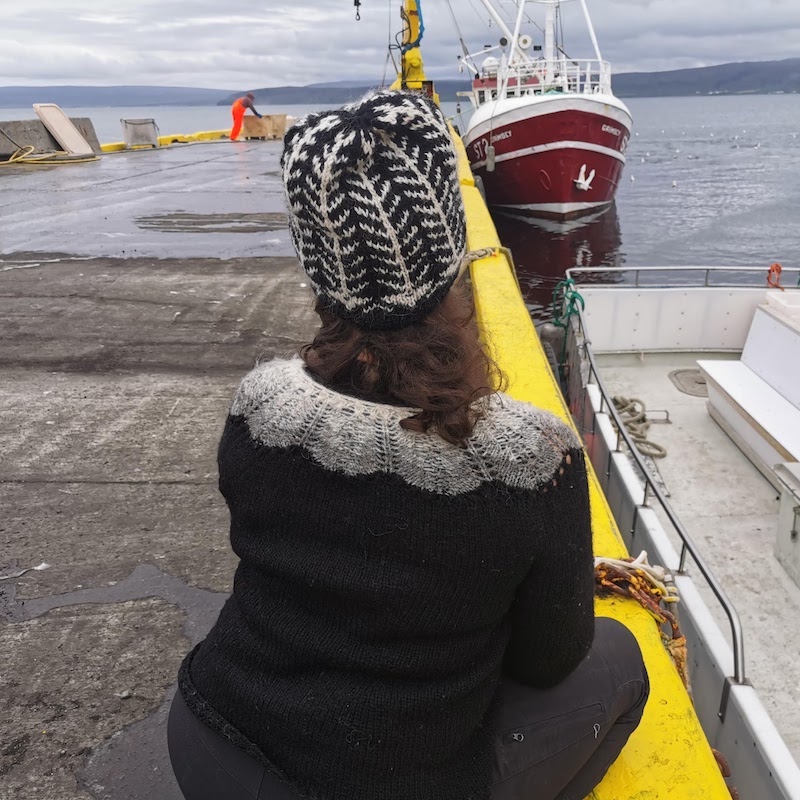 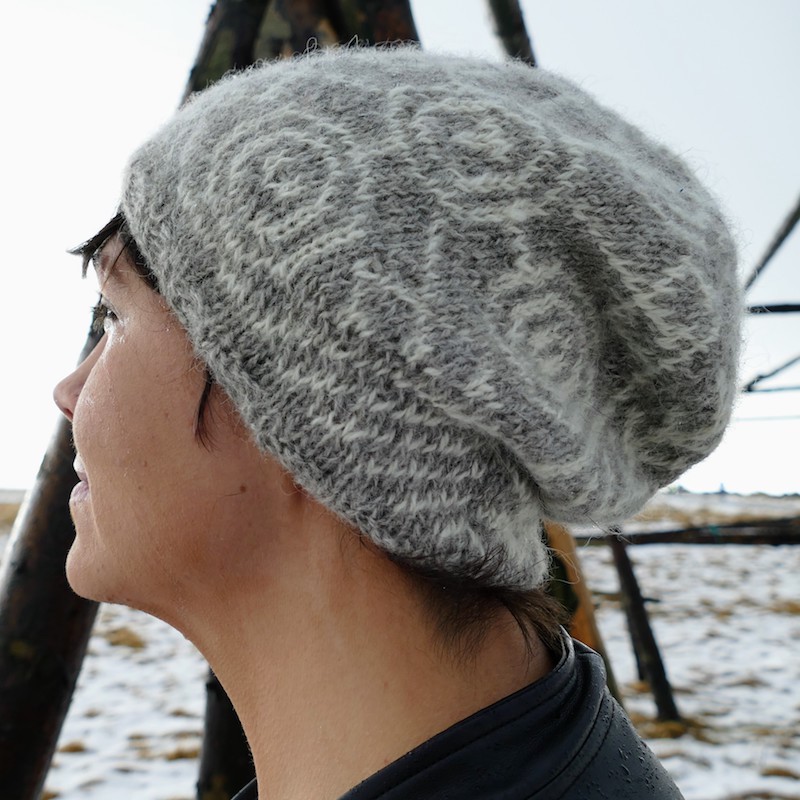 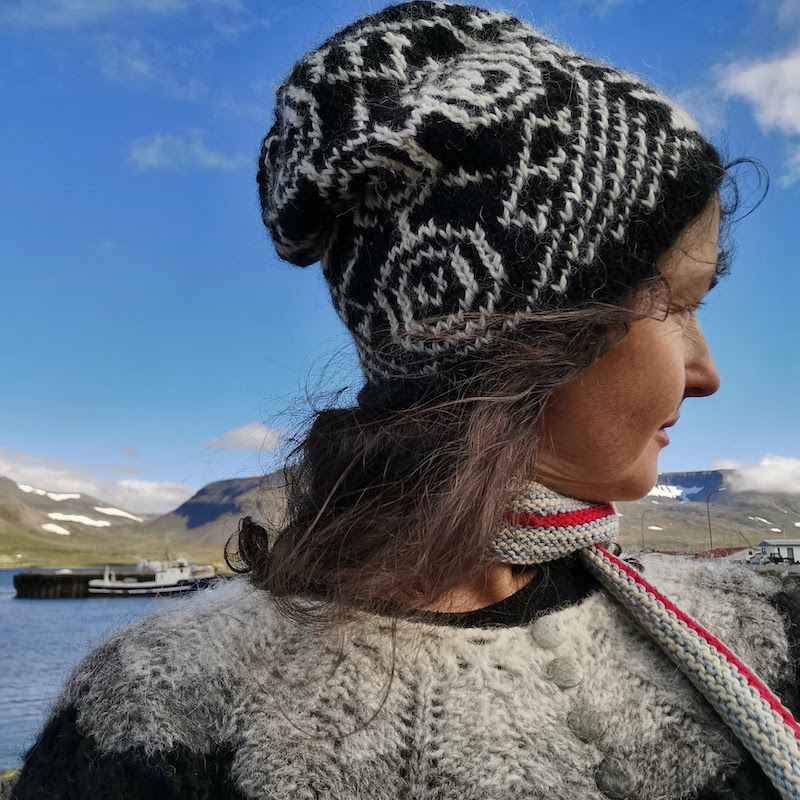 It can be knitted with any Aran weight yarn, I used Léttlopi and a bland of alpaca Mósa for my black hat, but the original grey one, which was part of my first Icelandic yarn club 2019, used the soft Hulduband, a 2 ply Aran spun by Hulda in her minimill, Uppspuni, using the wool from her own sheep. 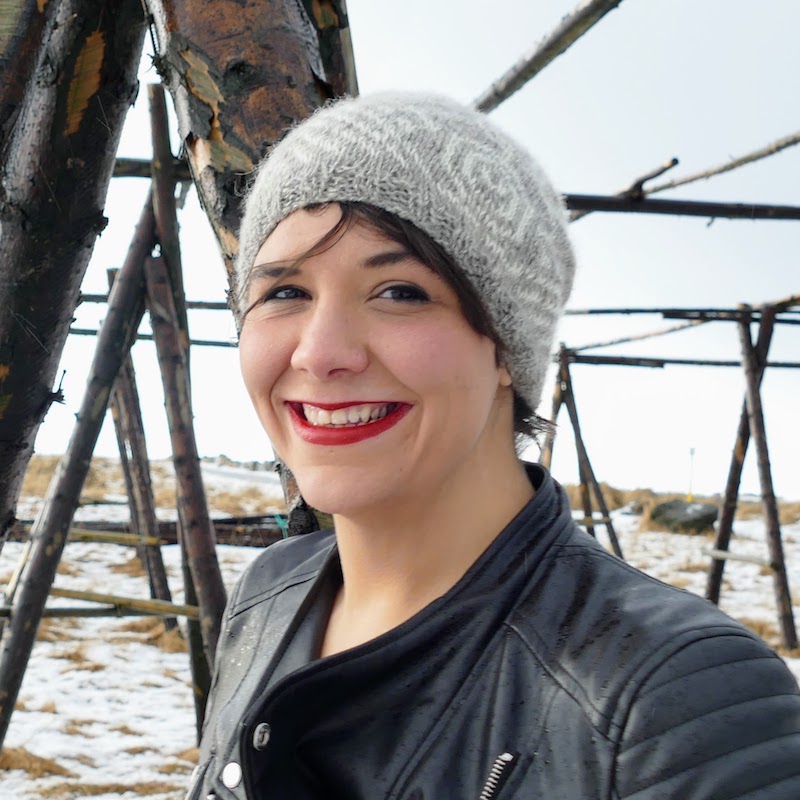 My friend Kai modelled for me and as you can see, they were not much luckier than I was! The wooden structures used to dry fish are completely empty! 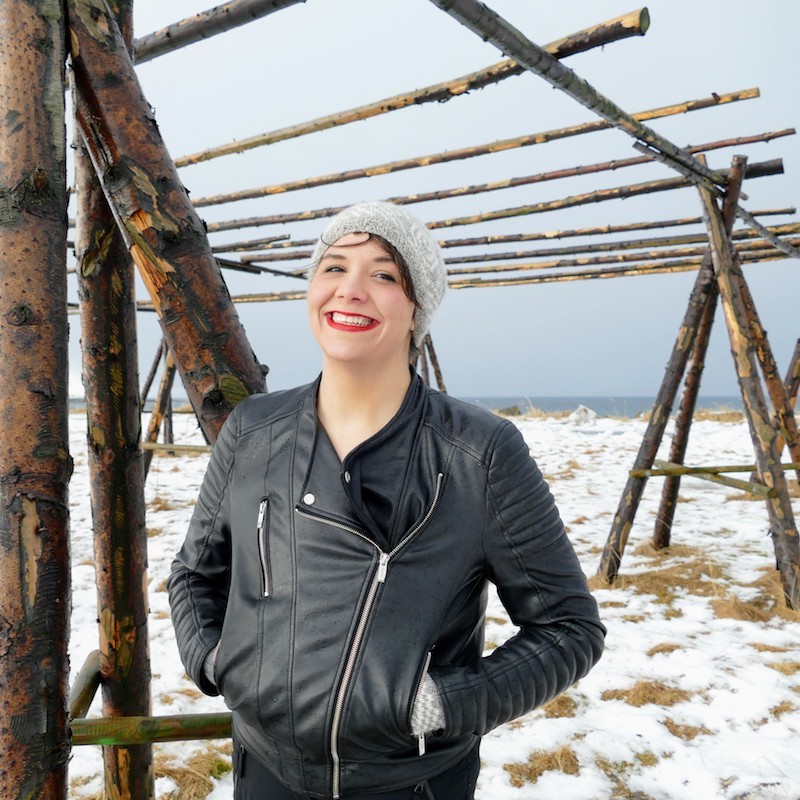 What yarn will you use and will it bring you any fish? I´m looking forward to seeing all your Veiðistafur hats! 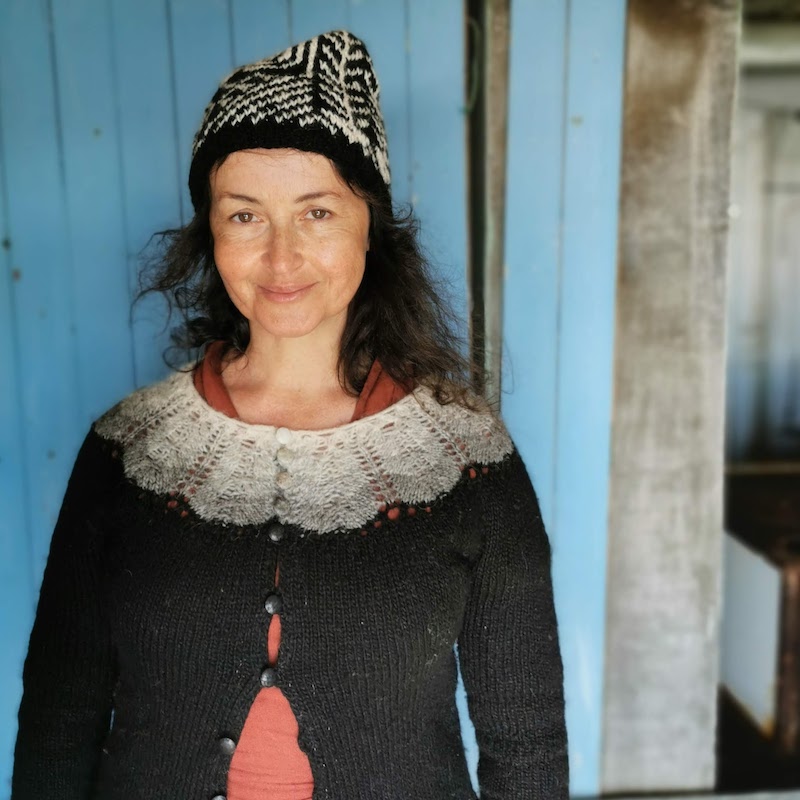 And yes I´m aware that Veiðistafur is not as short and obvious how to pronounce as SEX (see my previsous blogpost about how to name a sweater) plus it uses the Icelandic ð… For the pain, here is a picture of the two together with yours truly, enjoy! 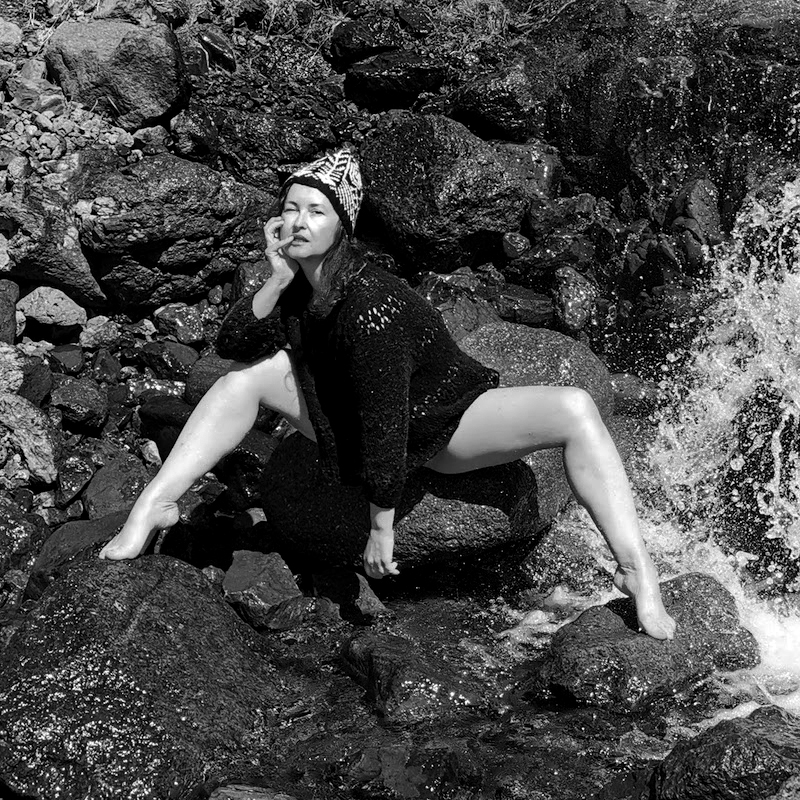 My trip to the Westfjords (6):

This site uses Akismet to reduce spam. Learn how your comment data is processed.